Sherwood ‘space pebble’ touches down in the Forest

A pebble which a visitor to Sherwood Forest took home to the USA as a souvenir almost 30 years ago has arrived back at the forest, via a 4.8 million-mile detour – to space.

The humble 1.5 inch-long stone was one of the last items to be carried by the space shuttle Atlantis, which docked with the International Space Station during what would be the shuttle’s final flight in May 2010, just a year before the whole shuttle programme itself ceased.

It was provided by Jeff Mitchell who had brought the pebble home to Orlando, Florida, as a memento of his trip to Sherwood Forest with his wife Beth when they visited the UK in the early 1990s.

“My wife and I were big Robin Hood fans, so we just absolutely had to go to Nottingham and to Sherwood Forest. It was actually the first place we went to after we landed in London,” said Jeff.

“We wanted to see what it was really like because the movies were all different and showed different things.

“We were extremely surprised at just how different Sherwood was from the movies, and how much better it was.

“We had a great time just wandering around, looking at the oak trees and hearing the stories about how the trees were used to make sailing ships. It was just a marvellous, marvellous time.”

While working for NASA’s Astronaut Support Team as an astronaut representative, Jeff was invited to supply an object which was small and light to travel on the Shuttle.

He explained: “The deal from NASA was that staff gave them two objects as mementos to take into space and they would pick one. We provided the pebble and a piece of my wife’s jewellery, as we thought either one would be a good memento. NASA chose the rock, although I still don’t know why.

“It went up in the Space Shuttle, which docked with the International Space Station (ISS) during the mission.”

The pebble has its own Certificate of Authenticity from NASA, confirming that it travelled 4,879, 978 miles into space and back over 11 days. 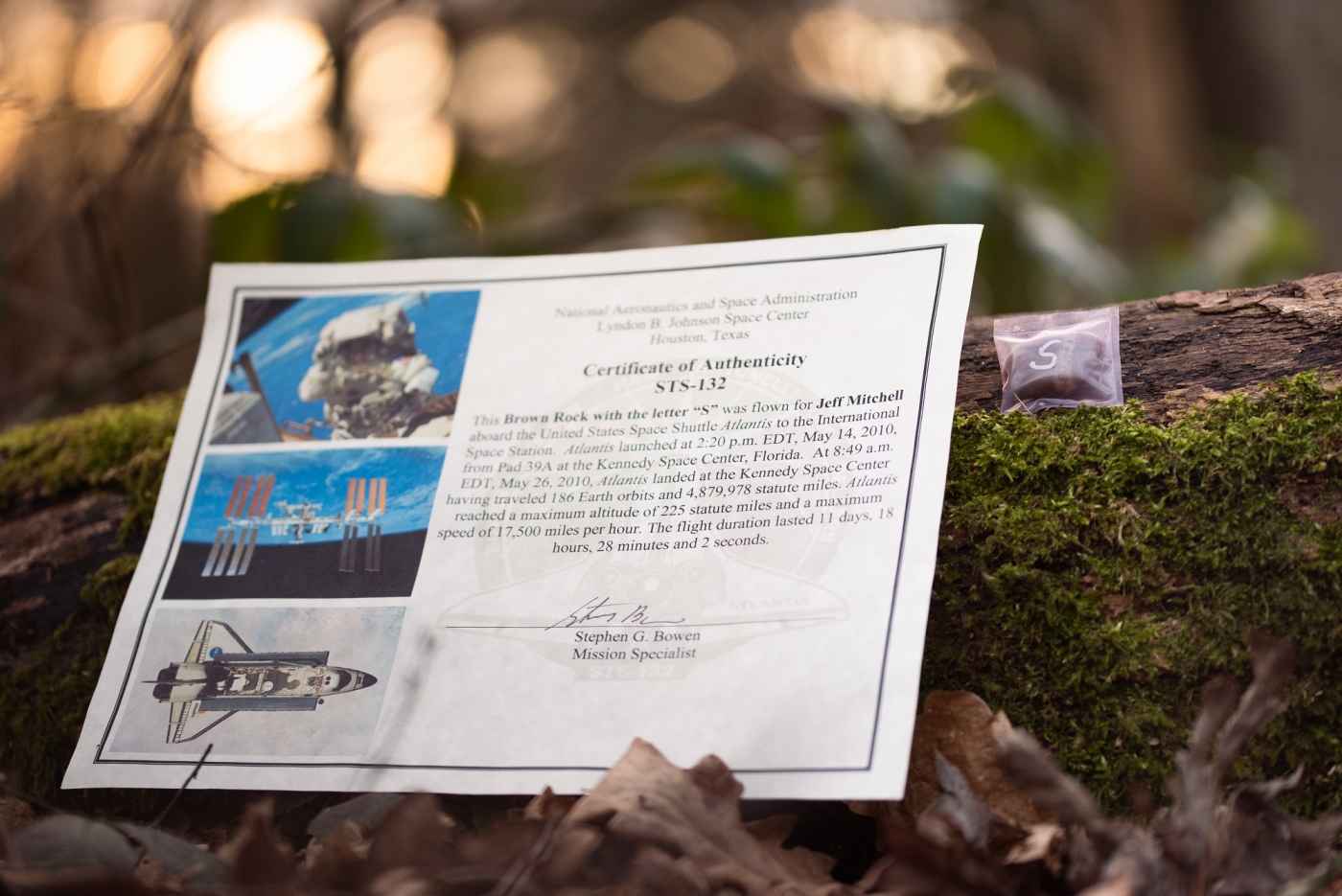 The Sherwood space pebble and the NASA certificate to confirm its four million-mile journey into space. Picture by Nicole Lovell

Jeff, who teaches subjects including rocket propulsion and human space activity at Florida Institute of Technology, also visits schools to talk to pupils about his work with NASA and the support he provided to the astronauts who travelled in the shuttles.

His role included advising them on hardware being taken up on the shuttle to the ISS, packing equipment for their mission and helping them to leave the shuttle after it had landed back on Earth.

Two of his own students have gone on to become astronauts.

Although Jeff and Beth had hoped to one day visit Sherwood together to again, Beth sadly passed away in 2013. Jeff has now sent the pebble and the Certificate to RSPB Sherwood Forest.

“It would be great to have it on display, so that other people can see it and understand that this is an object which has been all the way from Sherwood Forest, up to outer space and back to Sherwood again. It’s quite a trip,” said Jeff.

RSPB Sherwood Forest Visitor Experience Manager Jess Dumoulin said: “We were absolutely astounded when the pebble arrived with Jeff’s letter and confirmation from NASA that it had travelled into space.

“It’s wonderful to know that this souvenir of Sherwood and the time they spent here meant so much to Jeff and Beth that they selected it to travel on the space shuttle. We will be delighted to put it on display at the Visitor Centre.

“We already knew that Sherwood Forest was famous right across the world, but to find out that a piece of it has actually left Earth, travelled millions of miles and returned safely to us has been a wonderful surprise.”

There will be a clear focus on space and the night sky at RSPB Sherwood Forest on 26th March and 9th April when members of the Mansfield and Sutton Astronomical Society will be leading Stargazing events at the reserve.

Tickets are £15 per person (£12.50 for RSPB members). To find out more and to book a place on these fascinating events, visit our Events page.