The crimson-crowned dweller of Sherwood.

An encounter with the Lesser Spotted Woodpecker…

It was one of those early April days where Spring really starts to flex its muscles.

The song of Chiffchaff was bouncing off the oak trees, laden in buds straining to contain the leaves held within them. At the base of the standing dead birch tree, the white of fresh wood chip seemed to glow, scattered amongst the bramble’s tendrils. Turning to gaze up the length of the tree revealed the source – a hole. A small one.

A few weeks later, on the 12th of April, an excited phone call confirmed what we had been hoping for. Indy, one of our volunteers, had seen a female Lesser-spotted Woodpecker leaving the hole. We were ecstatic. We had found Sherwood’s ornithological holy grail – a nest of its rarest bird.

The Lesser-spotted Woodpecker population is estimated to be only 4 breeding pairs but proving that is difficult. No bigger than a House Sparrow, Lesser-spots seem impossibly small for a woodpecker and are notoriously hard to find. There’s a reason they’re called Lesser-spotted. It’s also the rarest species of woodpecker in Britain by a long way, having declined in Britain by 72% since 1974. Although tiny, their territories can be huge. One pair of these birds can require as much woodland as 500 pairs of Blue Tits.

They rely on standing dead wood for much of their food, foraging for the invertebrates that live on it. As we fragmented our woodlands and tidied up the bits that were left, standing dead wood became a rarer commodity and so Lesser-spots became scarcer.

Lesser spots rely on standing dead wood for much of their food, as well as nesting sites. Photo by Lucy Hodson

Remarkably for such a rare and secretive bird, our pair had decided to nest right next to one of the main paths, making keeping an eye on them easy. Through Twitter, we became aware of Ken and Linda Smith’s Woodpecker Network project. Over the last few years their project has aimed to gather as much information on the breeding ecology of Lesser-spotted Woodpeckers as possible. The more knowledge we have on the lives of these little birds, the better chance we stand at protecting them.

But how can you gather information on a bird’s nesting habits when you can’t actually see its nest? In an astonishing show of commitment, Ken and Linda spend each Spring travelling the country visiting Lesser-spotted Woodpecker nests they have been alerted to. Armed with a custom-built camera on a telescopic pole, they can view inside the nest to check its status and gather crucial data.

On May the 1st we welcomed them to Sherwood and headed to our nest to find out what was going on inside. After waiting patiently for half an hour for the male, who does a large part of the incubating, to leave the nest we moved in for a quick check. 7 eggs – the most that Ken and Linda had ever seen. A fantastic result. 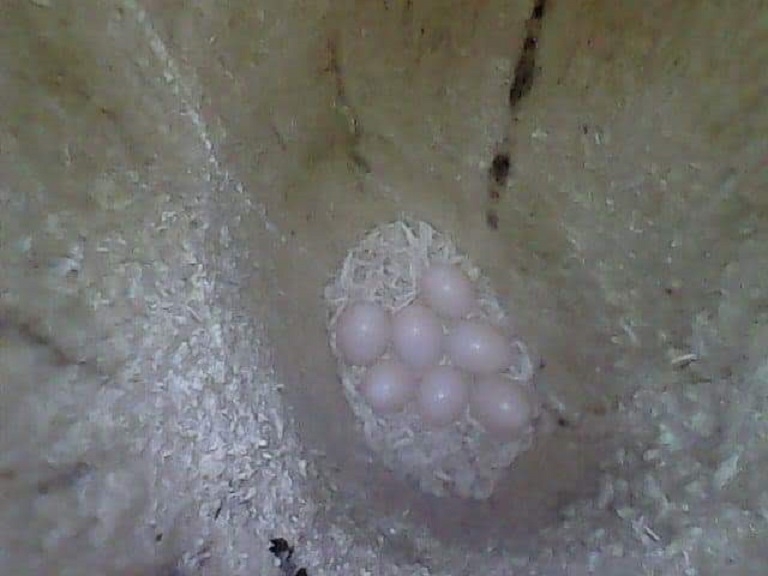 To continue following the nest’s progress, we were kindly allowed to borrow one of the cameras and, on the 9th of May, we noticed that 5 of the eggs had turned a pink colour. This suggested that they were close to hatching and, sure enough, 5 days later we were greeted with the sight of 3 naked, blind chicks. We don’t know why the other 4 eggs didn’t hatch. Ken told us that it seemed to be a feature of woodpeckers that they always lay more eggs than chicks they manage to raise. These are the kind of conundrums we can hope to unravel by getting privileged views inside their nests.

Our trio of chicks continued to grow well and by the 28th of May we could tell their sex.  The colour of feathers growing through on their cap was the clue and one red head and and two black told us we had a single male with two females.

Being able to watch the daily activity of such a bird was special. The parents would arrive at the nest with beaks stuffed full of aphids gleaned from the oaks, greeted by hungry mouths clamouring to be fed. The chicks competed against one another to be the one monopolising the entrance hole, giving the adults no choice but to feed them. Their desire for food wasn’t quelled easily though, and no sooner had they been fed than they were squawking again. With an effortless flick of black and white wings, the adults melt back into the verdant canopy in their never-ending quest to keep the chicks full.

After fretting about the safety of the nest since discovering it, we started to relax. Perhaps it was going to go as smoothly as we’d hoped? 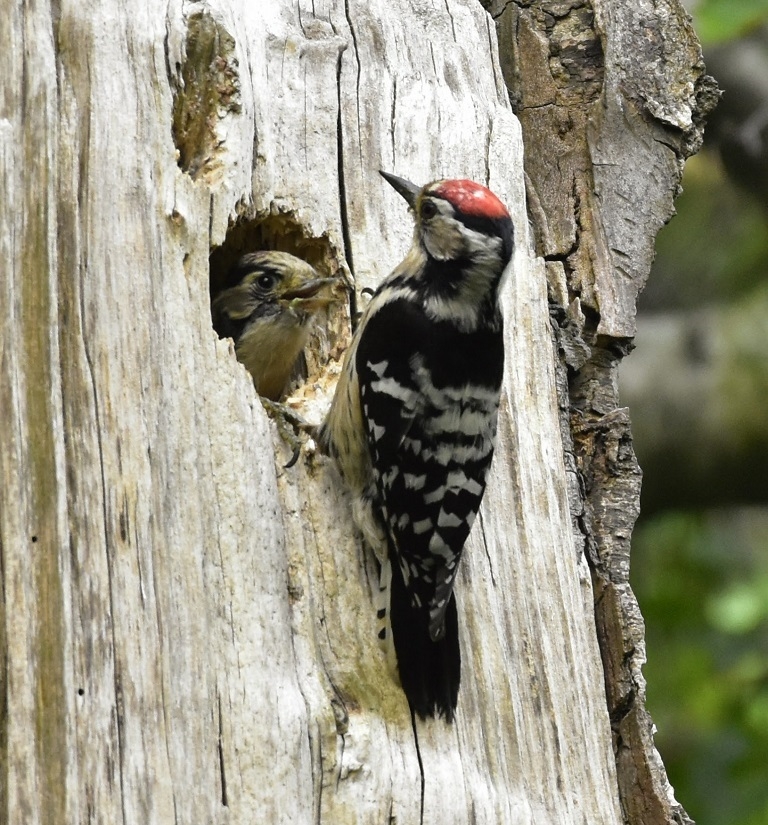 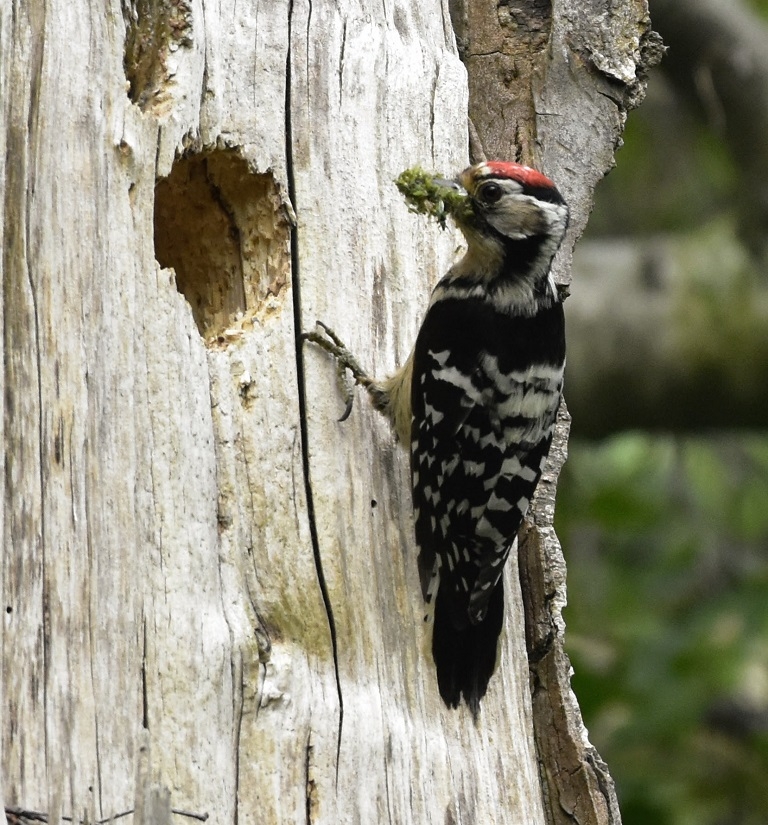 But nature is rarely that straightforward and, on the 30th of May, the attentions of a Great-spotted Woodpecker caused us to worry. Great-spots are a known predator of Lesser-spot chicks and are one of the main causes of nest failure. One had found our nest and was thoroughly investigating it, casting its eye over our three youngsters. Although it was disturbed by visitors on the path, Great-spots rarely forget a source of food once they’ve discovered it. The fate of our chicks was hanging in the balance. The following day, the nest hole was empty.

Thankfully we weren’t downhearted for long as, on the 1st of June, we were able to photograph the male chick in the trees around the nest. We have no way of knowing whether the Great-spotted Woodpecker returned but, as the young were at fledging age, it’s certainly possible. I like to think they all got away.

It was a great story, made even better by the news that ecologist Carl Cornish and Louise Hackett from the Woodland Trust located another nest on the 24th of May. Following the sound of begging chicks led them to a nest with a male and female chick that was monitored until they fledged successfully.

Interestingly, this second nest was only being fed by the male parent, whilst the chicks in the first were being cared for by both. Female Lesser-spotted Woodpeckers are often known to desert their chicks in the latter stages of raising them, heading off to rebuild their energy reserves and leaving the male to bring them to fledging age.

All in all, a fantastic season. Two nests that both fledged chicks and, through working with the Woodpecker Network and submitting our records to the British Trust for Ornithology, we can ensure that our understanding of these secretive birds grows. This will be vital in helping to secure their future. In the meantime, we hope that Sherwood, with its gnarled oaks and decaying birches, will continue to be a stronghold for them, offering the prospect to a glimpse this woodland sprite for many years to come. 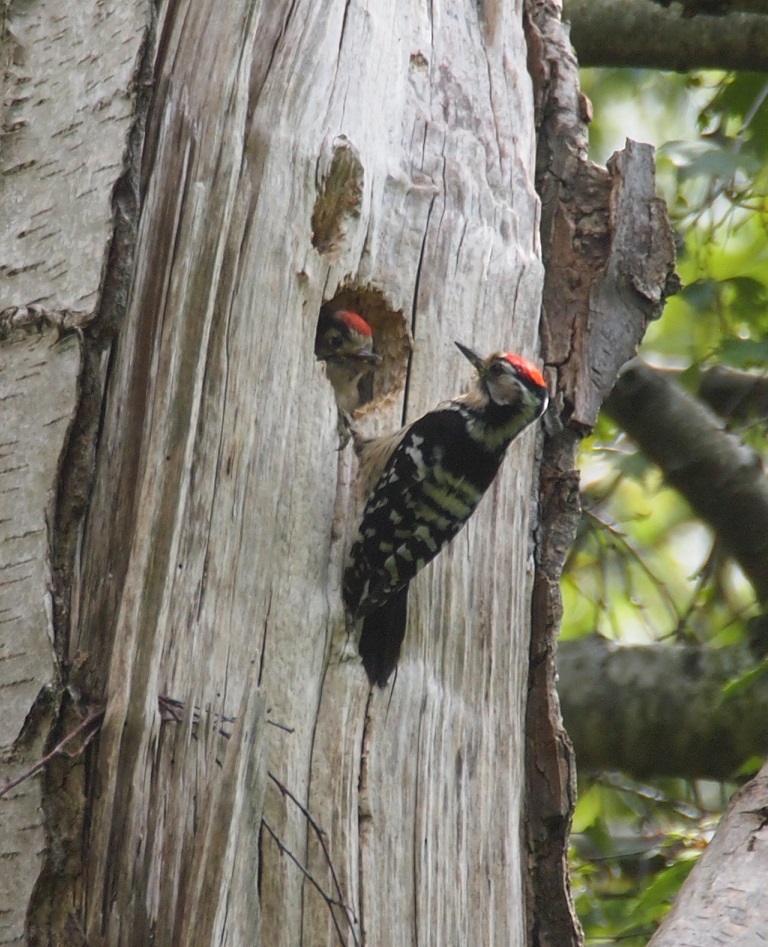 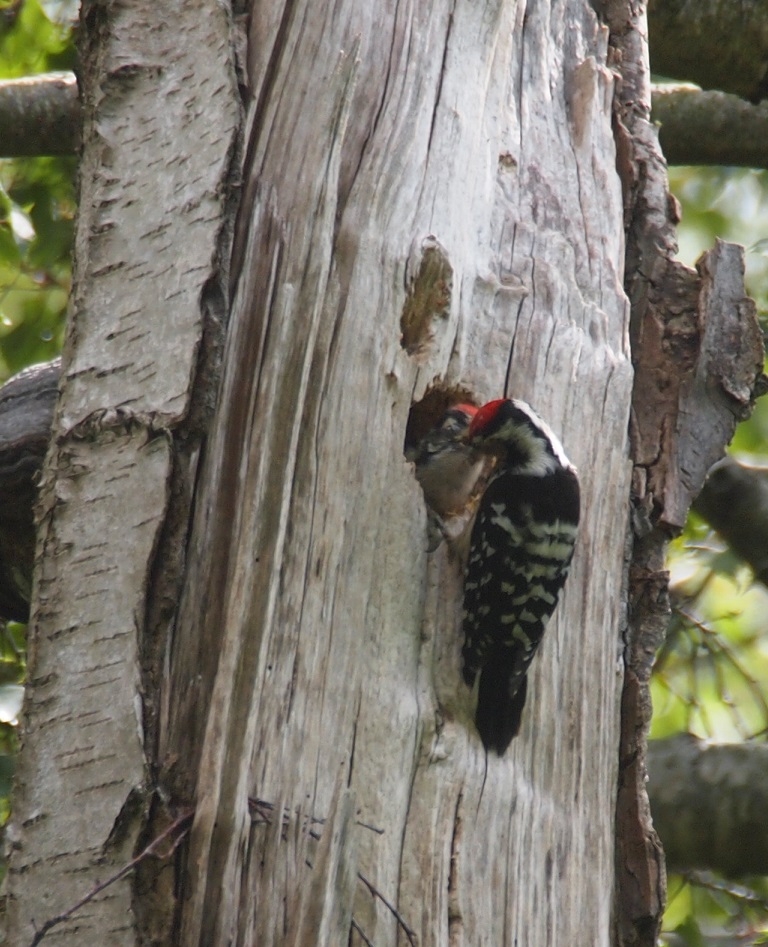